Uganda has qualified for the African Cup of Nations (AFCON) for the first since 1978.

The majority of fans who watched the game at the Mandela National Stadium were witnessing a piece of history for the first time in their lives.

Uganda has come close to qualifying for AFCON on multiple occasions before. South Africa, Rwanda, Kenya have all before denied the country a chance of qualification at the last breath.

Heartbreak is what the majority have been accustomed to. And photographing that has never been an easy stroll for a passionate supporter of Ugandan football.

To be a witness of this remarkable achievement was something awkwardly new. A moment I was personally experiencing for the very first time.

For a moment, I wished to drop my cameras, take off my shirt and run around the stadium screaming, hugging strangers with my sweaty body, photo-bombing pictures and just consume a moment that has taken the country 37 years to achieve. 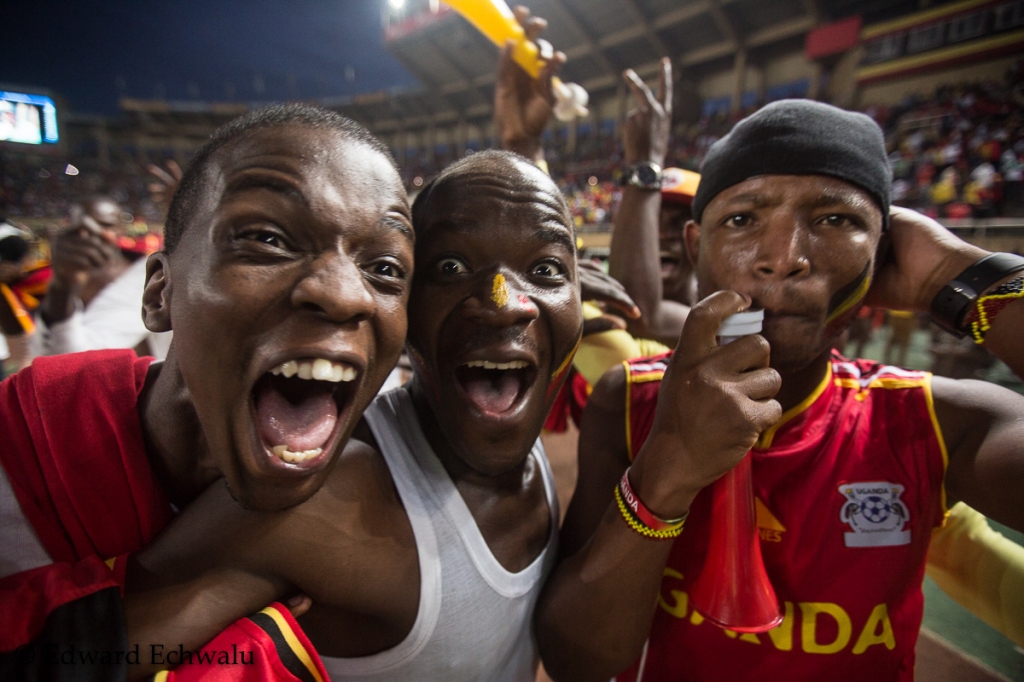 But I could not. Rather, I chose to exert my emotions into capturing the exact emotional expressions I would have been part of had I been free off my cameras.

The pictures seek to express the raw emotions, some hilarious, others awkward but all genuine attempts at consuming a rare moment in their lives. 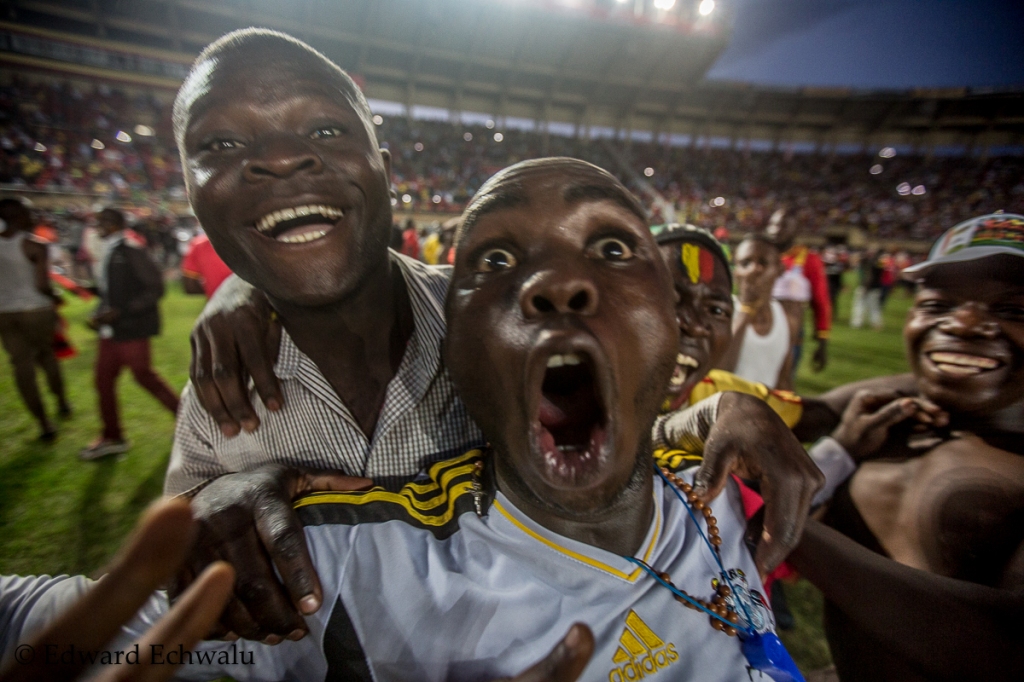 Through my lens, I could literally see far beyond people’s throats; I could see blurry and uncontrolled expressions of ecstasy; I could see energy levels exceed human capacity. 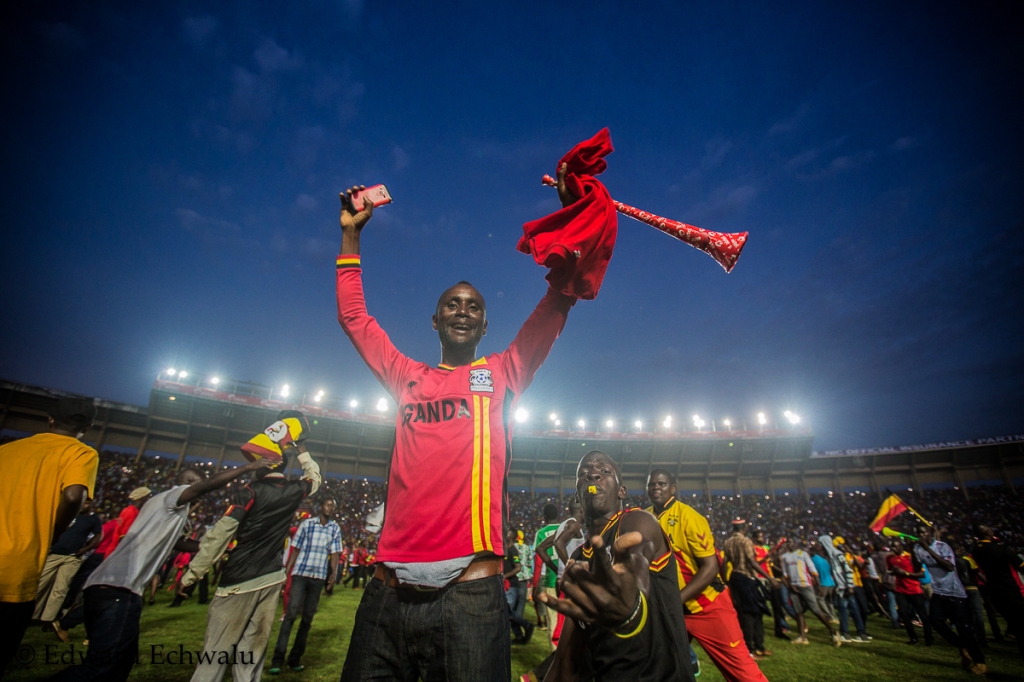 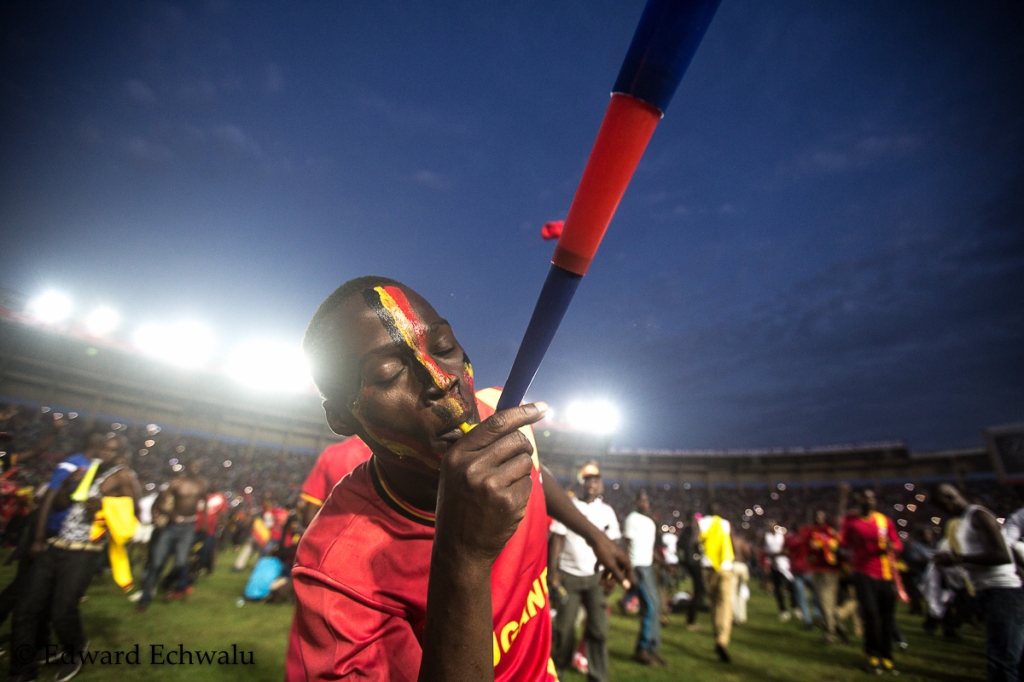 Others inwardly celebrated the achievement with a loud silence of meditation.Many left the stadium in total disbelief of what had just happened. A fan blows a Vuvuzela with eyes closed after the final whistle.

European football has a huge fan base in Uganda. Perhaps because, Uganda consistently has fallen short of mixing with the continents elites. A fan celebrates on the pitch while wearing a Manchester United jersey after Uganda beat Comoros by a single goal to qualify for the African Cup of Nations

Shirts went off. Trousers went off. Hats went off. Any form of expression that added flavour to the moment was welcome.

Those who could not longer be on their feet took comfort in feeling the grass that played out an important role in ensuring Uganda qualifIed for AFCON.

And we roared on and on and on. Whatever happens in Gabon is secondary to this moment. Qualification was a trophy in itself.