Fish as a meal might soon be a luxury for an ordinary Ugandan if the fish stocks on most water bodies across the country continue to dwindle.

“A worker feeds the fish at the pilot project site in Jinja, located 80km east of Kampala, Uganda’s capital. There are approximately 50 cages containing in excess of 400,000 fishes”

And it’s not just the populace; over 50% of fish processing factories along the shores of Lake Victoria have already been closed to protect the scattered remaining fish on the lake. Those in operation are operating below capacity.

“Fishing has always been on the increase leading to the disappearance of some fish species, which has been worsened by the Nile perch feeding on many of these species. As a result, fish processing factories are operating below installed capacity,” Said Dr John S. Balirwa, Director of Research, National Fisheries Resources Research Institute (NaFIRRI). 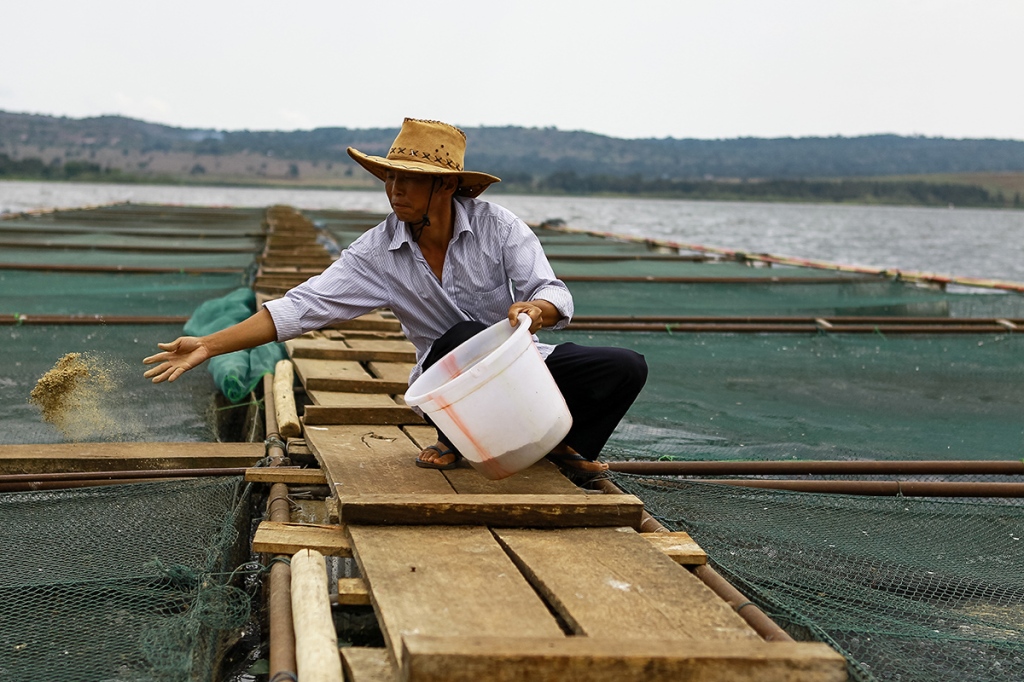 “The pilot program is a joint agreement between the Ugandan and the Chinese government. Here, a Chinese cage expert feeds the fish at the pilot site in Jinja, 80km east of Uganda’s capital, Kampala”

There is a lot of pressure being exerted on the 20% of surface water (lakes, rivers, swamps, damns) in Uganda, a country with a 256.000 square miles size of land, which has negatively impacted the different fish species. Uganda has a total of 500 different fish species. Of these, the Nile Perch has turned out to be the most commercially viable fish. 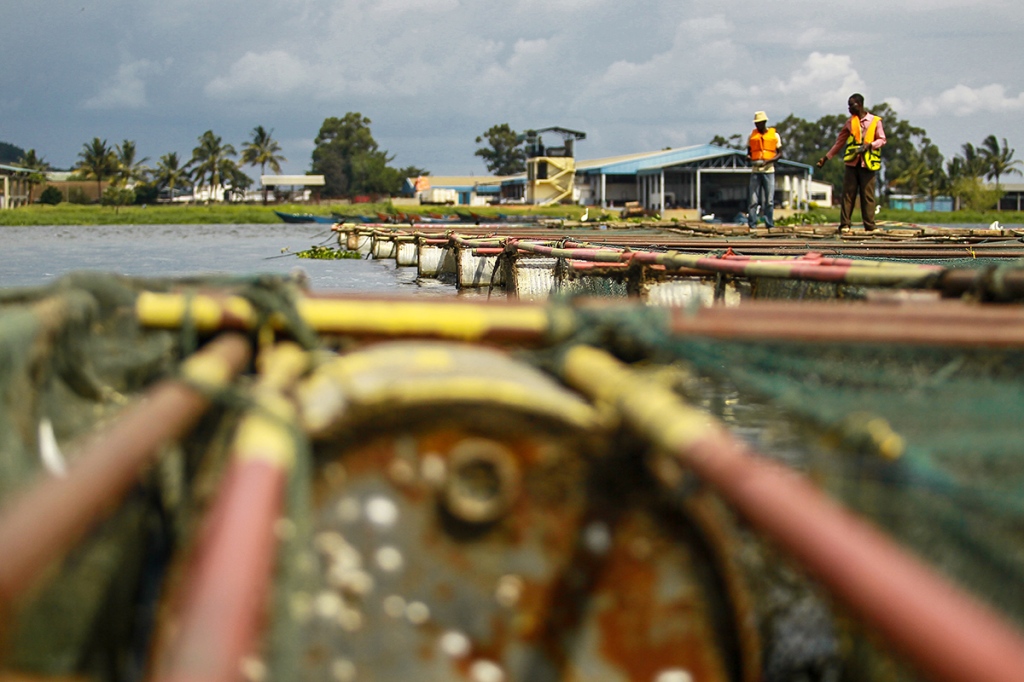 “Floating cages where fish is confined”

“Fishing intensity has over time increased because more ore people are eating fish than before. Through more than 50 years, fishing intensity increased with the introduction of Nile Perch on Lake Albert and Lake Victoria; it exploded to become a commercial product of interest where fish processing factories started,” according to Dr John S. Balirwa. 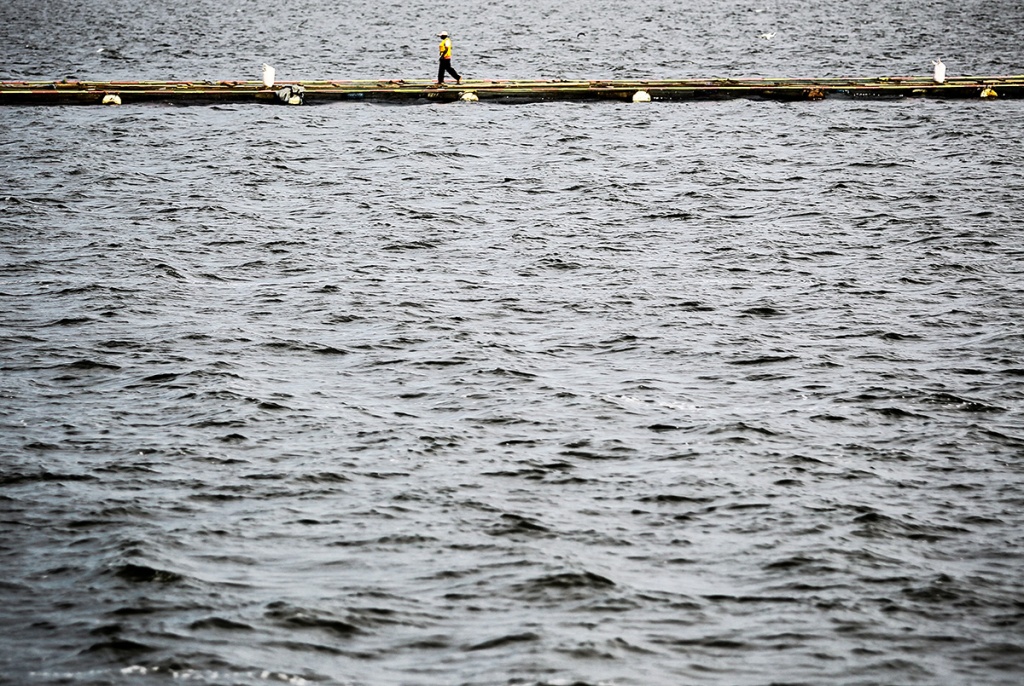 It was followed by a period of boom, where more factories were set up to absorb the high numbers of fish, local fishermen caught fish unselectively using wrong nets and the desire to satisfy foreign markets also increased.

“Some of the caged fish jump around during  feeding time. It takes about 45 days to harvest these fish in the cages.”

Dr. Balirwa also attributes the declining number of fish on Uganda’s major water bodies to the increased population, from 20 million people in the 1970’s to approximately 35 million today.

As the demand for fish both for exports and local consumption continues to rise, starring a need to bridge the gap, innovative ways such as cage culture have been introduced on Lake Victoria, in Jinja through a pilot partnership between the Ugandan government and her Chinese counterpart to boost the shrinking number of fish.

“Some of the biggest challenges faced by NaFIRRI is birds such as these that prey on the small fishes. Keeping them away from the project site has turned out to be a full time job”

A cage is constructed, floated in a researched clean water body where fish is confined and fed. The cage can be floated in a river, a lake or even a dam.

“Use of illegal fishing nets has been among the major factor in the dwindling number of fish on major water bodies in Uganda. These nets capture immature fishes”

Every cage, which is usually two and a half meters deep, should be placed at least five meters above a body of good water quality. Polluted water suffocates the breeding process of the cage fish, a reason, not all water bodies in the country qualify for this kind of invention.

“In the background is one of the factories located at the shores of Lake Victoria. Most of these are now operating below capacity due to the decreased number of fish”

Cages are stocked with so many tiny fish, after a period of 40 to 45 days; they are graded before being separated for harvest. Each of the 50 cages in the Jinja pilot cage project accommodates approximately 8000 small fishes. 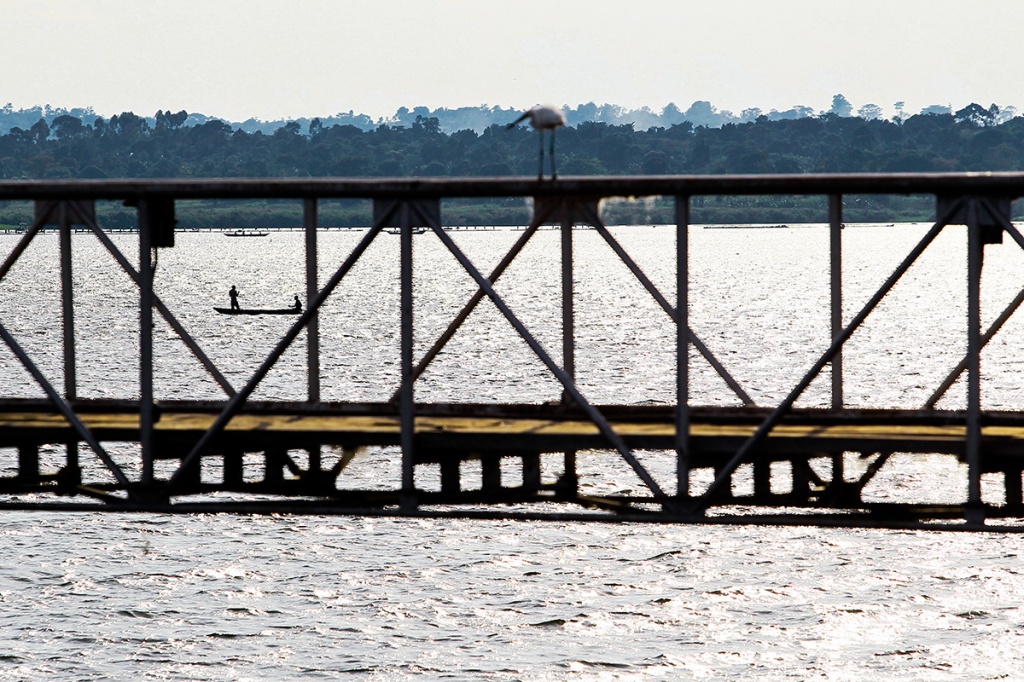 “Fishermen are seen fishing on Lake Victoria. They have been largely blamed for indiscriminate methods of fishing, leading to reduced number of fish on the Lake”

Dr Balirwa further notes that, with recovery of cages, Nile perch is responding positively and it has stabilized at a certain level, which in total quantity stands at about 300.000 tones, but mostly young fishes. 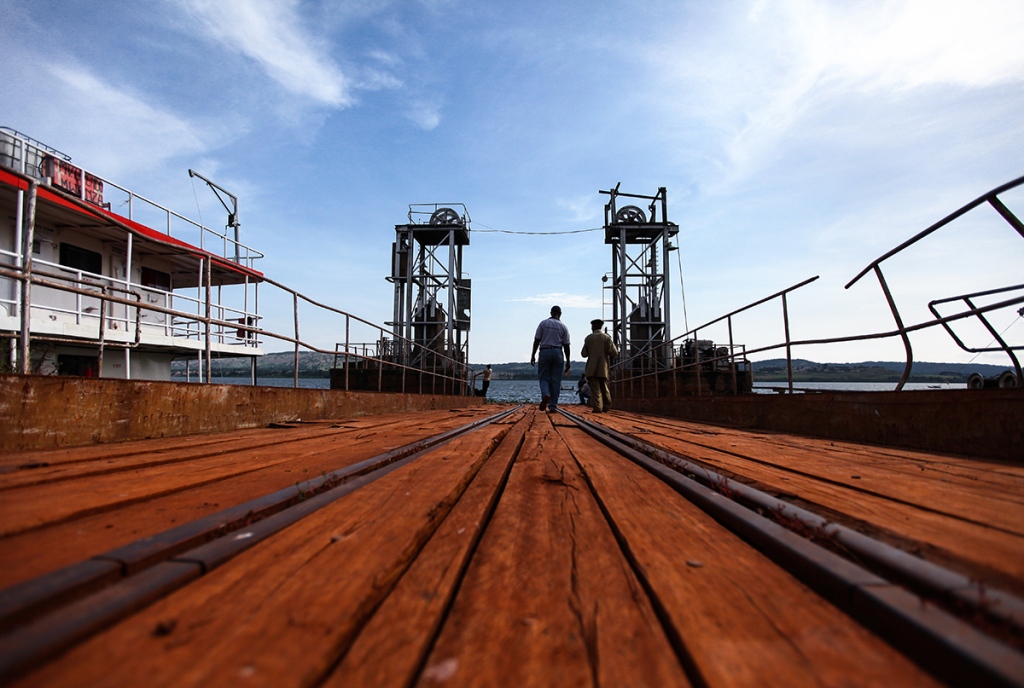 “NO MORE EXPORTS: This railway line leading to the dock used to be a busy port where fish used to be exported to both, the local and the international market.It no longer functions”

Other forms of aquaculture, such as fishponds currently harvest a combined 90.000 metric tones annually. Presently, the total annual fish production in Uganda stands at 450.000 metric tons. 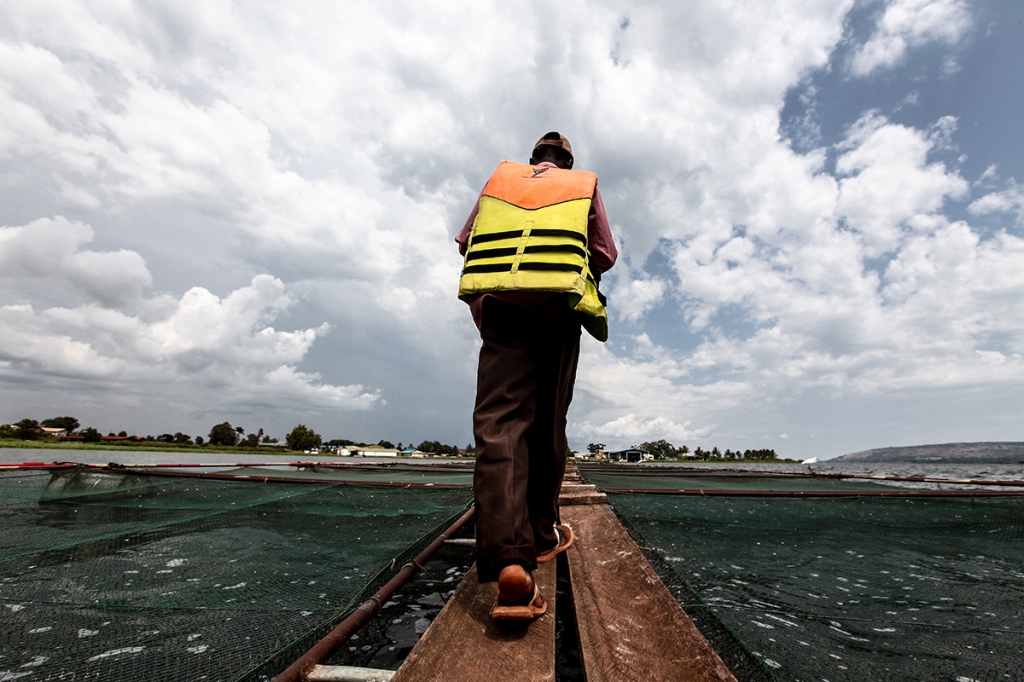 NaFIRRI hopes that local investors who can use simple materials such as bamboo and nets, easily accessible in the local market, take up this technology. 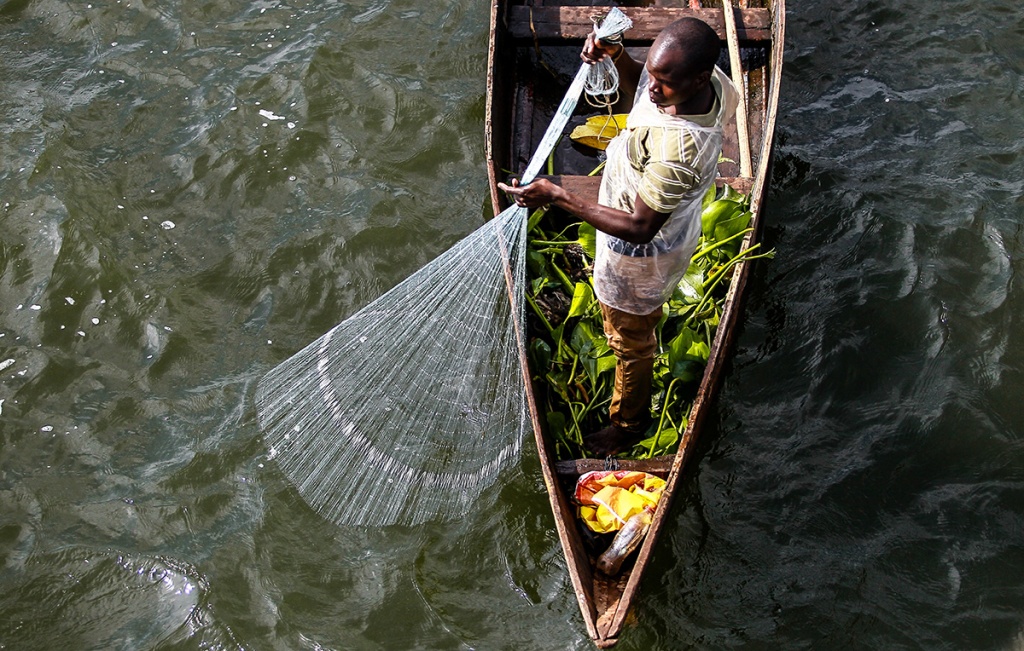 “A fisherman is seeing pulling his “catch” on Lake Victoria. They have been largely blamed for indiscriminate methods of fishing, leading to reduced number of fish on the Lake”

“We are looking at encouraging Ugandans, local investors, and the local fishermen/communities to join in as an alternative where by if they can pick a leaf from this technology and they practice it somewhere, they can also reduce on the pressure where many fishermen are getting into the lake,” Barry Kamisa, a staffer for NaFIRRI Concludes.