The once bleak careers of four budding female boxers has got a surprise lift now that good Samaritans have offered to fulfill their dreams.

“Morine Nakilyowa (23), is a mother of four and has won two of her five fights.”

Morine Nakilyowa (23), Lydia Nantale (17), Hellen Baleke (24) and Diana Tulyanabo (20) live an impoverished lifestyle in the Kampala slum of Katanga. Without permanent shelter or jobs, Tulyanabo is pursuing her education as a nursing student but the rest are school dropouts.

It’s on the backdrop of this upbringing that the quartet resorted to boxing a few years ago as a way of surviving the harsh conditions of crime-ridden Katanga. Over the past two years, they have featured prominently in local tournaments representing Katanga-based Rhino Boxing Club. Still, they are yet to get the deserved recognition like their male counterparts.

“Lydia Nantale (17) (Right), has won one of her two fights to date. Here, she warms up for her training in Katanga Slum”

At the 2011 East African championships, Tulyanabo won the welterweight title while Baleke triumphed in the light welterweight division. The closest they came to realising their dream was when they trained so hard for last year’s AIBA Women’s World Boxing Championships in China only to be let down by government’s lack of funds. It didn’t help matters that local boxing is entangled in administration wrangles and, therefore, couldn’t mobilise support for them.

Since then, the fighters have struggled to make an impact due to the absence of a functioning amateur boxing body as well as the limited number of credible opponents. To keep active, they seek opponents from across the border and feature on the undercards of locally-arranged professional fights. In extreme situations, they take on each other at catch-weights.

Despite the setback and dire situation, the foursome still harbours big dreams of representing Uganda at future major international events. Indeed, that could become a reality following the timely intervention of Lori Steinhorst, the president of Classic Women Warriors Boxing (CWWB) and Eddie Montalvo, vice-president CWWB.

Touched by their story, which appeared in the Canadian National Post, Steinhorst and Montalvo have offered to help the female boxers with logistical support and any other form of educational assistance to develop their skills.

The duo say they are just “acting out of the love we have for the sport and all the girls/women who practice it ” are coordinating this effort with the help of The Observer.(Newspaper)

Steinhorst says they were not moved because of their gender but by the will and spirit of the young girls: “While this happens in many parts of the world, this has been our first look at how little these women have,” she says. “Yet they continue to make every effort to reach their dream as Olympic hopefuls. This is evidence to us that their poverty is circumstantial, as their spirits are rich and have no boundary.” 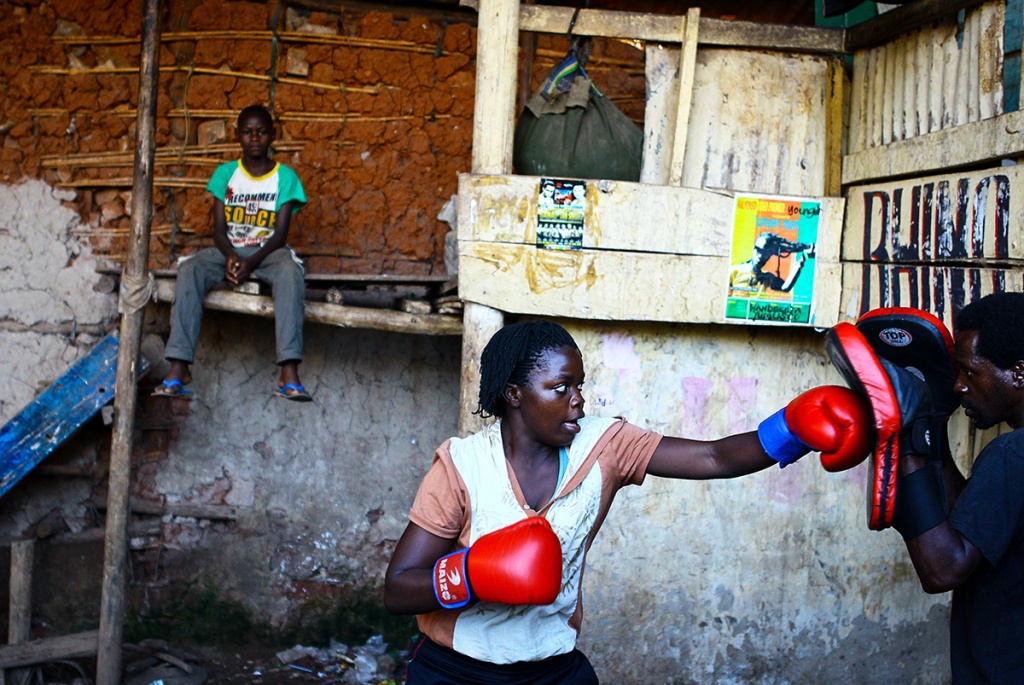 “Here, Hellen Baleke (24), the most experienced of the lot with 11 wins, four draws and a single loss goes through some boxing sessions with her coach in Katanga slum.”

To spice up the drive, CWWB product Mary ‘Merciless’ McGee has pledged a portion from her International Boxing Association (IBA) female light welterweight title fight against Holly Holm on May 11, 2013 to the project. “Whatever it takes, we must do something, anything, to help these women,” she says. “They deserve so much more.”

Tulyanabo and company are excited by the news and efforts of Steinhorst and Montlavo and have promised not to disappoint the efforts and sacrifices of the benefactors. “This is a once-in-a-lifetime chance that we have always longed for,” says  Tulyanabo. “Like all sportsmen, we want to compare ourselves with the best in the world to realise our potential and abilities. We shall do anything within our abilities not to disappoint.”

“An invite for Rhino Boxing Club for a local tournament.”

CWWB also set up a special project dubbed Women Boxers of Kampala Project (WBKP) to raise funds and awareness of the quartet’s plight.

“We will travel to Kampala in an effort to determine exactly what these athletes need to be successful,” adds Steinhorst. “We will take with us the equipment we know they are lacking. Once we are able to determine from these women what their needs truly are, we will return with the mission to raise additional funding to meet those needs.”

“There are no professional punching bags. They cannot afford to buy one. As a result, the four girls use discarded car tires as replacement. Here, Hellen Baleke (24), the most experienced of the lot with 11 wins, four draws and a single loss punches away.”