Surviving War, Fighting River Blindness and Not Giving Up:

“River Blindness….?” Christopher Oulanyah, a carrier of the disease over the last decade pauses, takes a few seconds to ponder his next words and then, with a light smile continues, “….15 years ago, that was the least of my worries.”

“A portrait of Christopher Oulanyah, 65yrs, who suffers from River Blindness. Christopher says his village was infested with flies that would bite and cause body itches. By then, he thought the itches were normal until the itches and other body changes intensified. “I started becoming concerned. It however took long for me to take serious notice because priority at the time was keeping my family safe from the LRA war that was causing havoc to my village. This reluctance to seek medical advice eventually rendered me blind while at an Internally Displaced Camp.”

Christopher, in a leaned and soft tone narrates his battle with Onchocerciasis, commonly known as River Blindness.

My teenage years were exciting of course. Uganda had just got independence and was generally peaceful. There was an aura of optimism, of prosperity, of good times ahead…but that is where it ends.

“Christopher Oulanyah, 65 years, is helped home by his youngest son after attending a village health meeting about River Blindness in Abam village, Lamwo district.He lost his sight to the disease that has been on the rise in northern Uganda. River Blindness together with The Nodding Syndrome (which still has no cure) continue to distract post-LRA recovery of northern Uganda.”

When the LRA insurgency surfaced, that was the beginning of my trouble. It was generally a popular cause in the beginning, so we thought until Joseph Kony started turning on his own brothers and sisters (referring to his tribe mates, the Acholi).

“A man points to a part of his legs that developed skin discolouration as a result of consistent and intensive scratching in Lamwo district, northern Uganda. Up to 1.2 million people in northern Uganda have bee affected by River Blindness.”

From then on, it was a case of survival. A case of living it one day at a time. I literally started living my life on the run for fear of abduction or even death. My nights became short and sleepless. Daylight didn’t fare any better.

I witnessed terrible things happen. From children being abducted, mothers mutilated and relatives killed in cold blood. And this went on and on and on.

So when you get a random body itch, believe me, that wouldn’t worry you. At the time, I would ignore the itches as just an accidental contact with a wild plant. It was common, since we were in and out of the bush, running away from Jospeh Kony.

My body itches though intensified in 1999. I had developed so many rushes and my skin colour had also changed. I also started seeing strange larvae in my eyes. My eyesight had started becoming blurry. 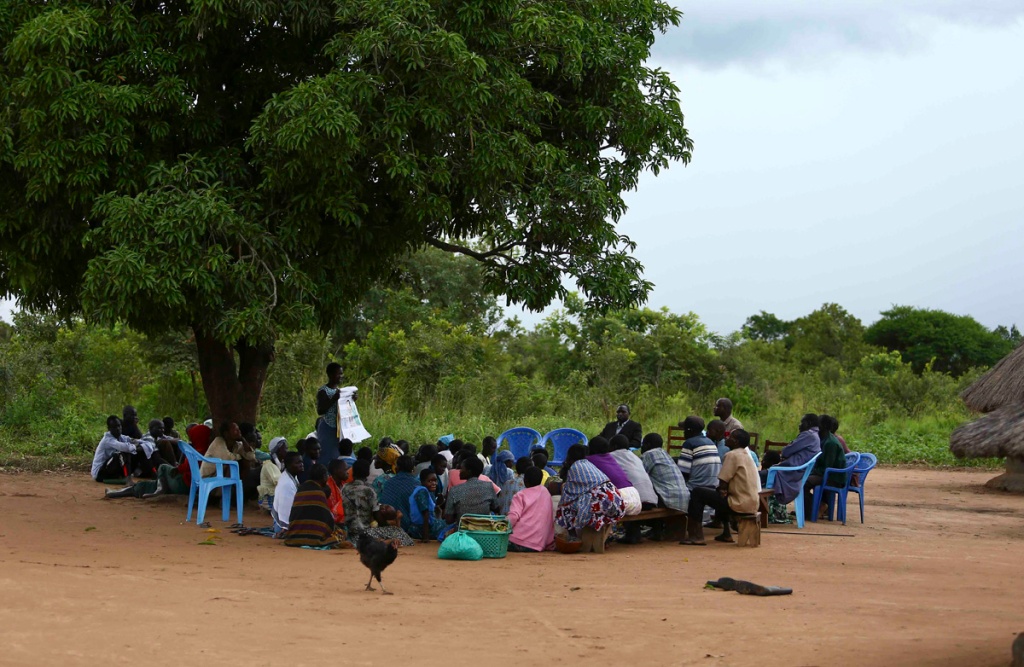 “A health community worker conducts a group health education on River Blindness in Abam village, Lawmo district, northern Uganda. Mass treatment of the local population through the support of The Carter Centre ensured that Lamwo came out as the best performing district in Uganda last year with mass treatment of River Blindness standing at a staggering 90%. Many of these people live in abject poverty, recovering from a gruelling 30 year LRA war, in that most an not in position to facilitate themselves to travel to hospitals. Up to 1.2 million people in northern Uganda have bee affected by River Blindness.”

I thought I was bewitched at that point. At the Internally Displaced Peoples (IDP) camp, I went to the health centre for medical checks, that’s when I was told I had River Blindness, caused by bites from flies.

Now it made sense. Back home before fleeing for the camps, there was a period where there were so many flies. It was strange but, nobody was concerned. You wouldn’t blame them. Safety from the LRA bandits was everyone’s priority. Besides, even mosquitos would bite and leave your skin itching. 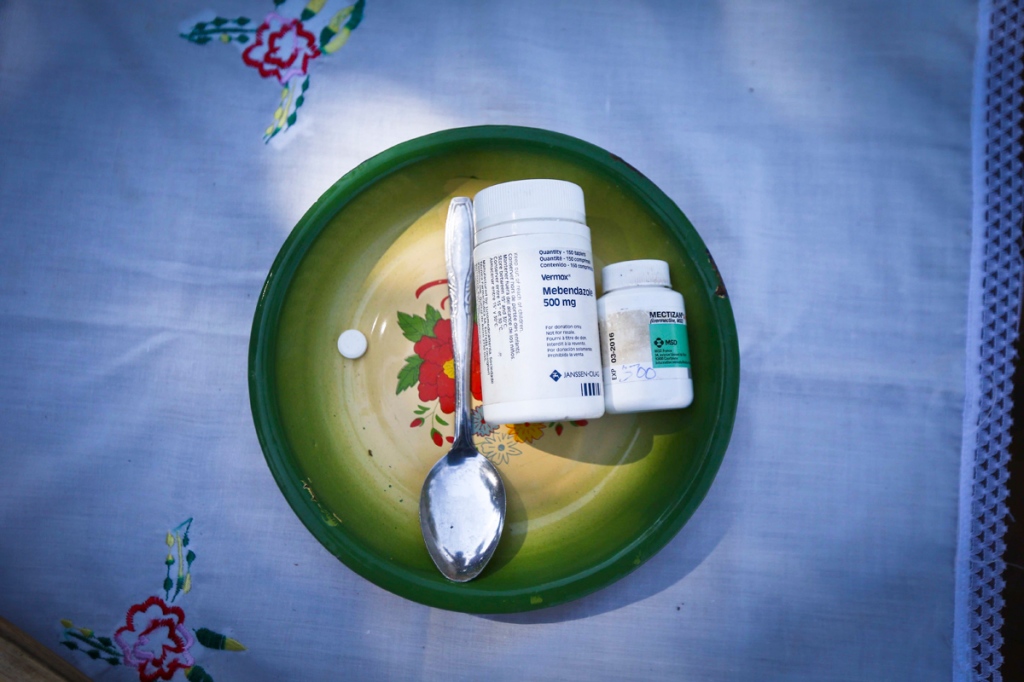 At the time, there were a group of people from Sudan who gave me and many others a drug but the side effects were too much and strange too. I started developing a lot of body swellings but eventually it slowed down though the itching continued.

The government then came up with some drugs in 2002. Some drugs were effective, others were not. At this point, my sight was fast giving way and I was desperate to have it fixed.

“A village drama group stages a play before some of the dignitaries from the Carter Centre, Lamwo district health teams and representatives from the government of Uganda during a community visit to mark the landmark 200 million preventive parasitic disease treatment, through 11 countries in the world. Lamwo, located in northern Uganda was the best performing district in Uganda last year recording a 90% coverage of mass treatment of River Blindness. A knit cooperation between Uganda and development partners such as the Carter Centre has reduced the River Blindness prevalence rates from 70% in 1993 to just about 5% today. As such, Uganda stands out among very few countries globally on the verge of eliminating the disease. Other countries include Venezuela, Mexico, and Ecuador.”

In 2009, Carter Centre gave a new set of drugs to me and many member so of my village. I had given up hope to be honest but gave in to taking those drugs as just a by the way. After-all, village health workers brought it to my door.

Remarkably, the side effects immediately after swallowing were immense but they have been the most effective. All my body swellings disappeared, my rushes also healed even though it left my skin discoloured. After many years of itching, I was cured, except my eyes of course. I cannot see. All I see is mist. And I still feel a lot of pain in my eyes.

“Women return from fetching water at nearby stream in Abam village, Lamwo district. The black fly that causes River Blindness through bits, breads in fast flowing water sources, rendering communities living near or alongside these areas more vulnerable. Up to 1.2 million people in northern Uganda have been  affected by River Blindness. However, a knit cooperation between Uganda and development partners such as the Carter Centre has reduced the River Blindness prevalence rates from 70% in 1993 to just about 5% today. “

Running my family remains my biggest challenge. What can a blind man do? I don’t have a regular job, meaning, my regular source of income as a casual labourer in other peoples farms was no longer possible.

I have had to forfeit my duties as the breadwinner for my four children, two of whom, are suffering from the Nodding Syndrome, one other, together with my wife, are battling onchocerciasis like me. My youngest son, 13 years remains healthy but is too young to take care of the family.

“A man sprays a swamp in Abam village, Lamwo district, one of many water sources that provide perfect breeding ground for the Black Fly that spreads River Blindness. Part of the measures taken by the government of Uganda in her bid to cab the spread of the disease has been to spray the shores of rivers, lakes and swamps to eliminate the larvae of the black fly. This is done in areas where the most vulnerable communities reside.”

So the question is, how am I running my family in this state? I live on handouts, small handouts from the generous hands of well-wishers who provide me us with food, clothing among others. That is hard to take for a proud man like me who prefers to personally take responsibility for his family.

“People walk along a dusty and rugged road leading to Lamwo town. Poor infrastructures, especially roads and public transport have hampered access to some of the most vulnerable communities in the district. As such a majority of these people have been and continue to be diagnosed with River Blindness in the advanced stages, which has greatly hampered the recovery chances. Many of these people live in abject poverty, recovering from a gruelling 30 year LRA war, in that most an not in position to facilitate themselves to travel to hospitals. Despite these challenges, Lamwo district emerged the best performing district in Uganda last year for mass treatment of River Blindness, recording an impressive 90% reach.”

I remain hopeful even when the odds are against me. And I hope taking the landmark pills as the 200th million person will inspire and give hope to those fighting this disease that it can be overcome.

It’s been a tough 30 years for me. It remains a tough but I am not giving up yet.

7 thoughts on “Surviving War, Fighting River Blindness and Not Giving Up:”